Colorectal cancer is the second biggest Cancer killer in the US. This sad figure could be dramatically improved if the diagnostic would be more effective.

A problem Berlin-based Epigenomics want to solve and just got a significant milestone: an FDA approval for commercialisation.

I met with Thomas Taapken, the CEO of the company in his office in Berlin, a nice historical building with 4 meters ceiling and close to the city-center.

Epigenomics was started in 1998 from PhDs at the Max Plank Institute for Molecular Genetics here in Berlin. The goal? To build a platform for research on epigenetics, and then commercialise product.

The company IPOed in 2004 on the Frankfurt Stock Market (one of the last German Biotechs to IPO).

By 2006-2007, the company counted 120 employees and 35 research programs. But then the original founders left and instead Epigenomics started focused on fewers programs, restricted to the diagnostic space only.

Taapken joined in 2011 to restructure the company and bring a clear focus towards the US. He shrank the company to 40 people on focused on making this first colorectal blood test work commercially.

Everyone is talking about liquid biopsies now, but we already invented it – 10 years ago.”

So what is the platform?

Epigenomics’ platform is as its name suggests – built on the field of epigenetics. Every tumor releases specific DNA fragments like these by ‘bleeding’, and these sections are very identifiable (biomarkers).

So the Epigenomics platform detects these fragments in order to identify the presence of a specific type of Cancer – a type of liquid biopsy taken as a blood test.

Epigenomics started with colorectal cancer – as it’s one of the deadliest cancers in the World (see our infographic). 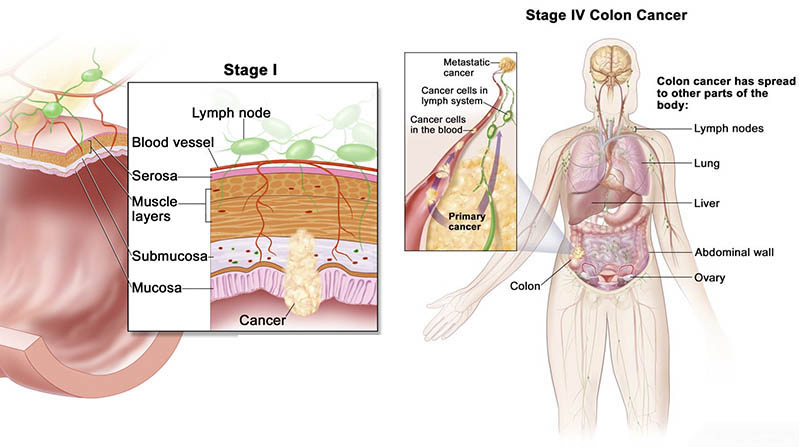 Colorectal cancers are one of the biggest killers in the US – Stages 1 & IV (Credit: US NID / Terese Winslow)

It’s the second biggest killer in the US, and in Germany you are 7 times more likely to die from Colorectal cancer than in a car crash…

The ‘good’ thing is that ‘it’s totally preventable if you detect the disease early‘. In fact, these kind of tumors grow slowly and if detected in the first stages before metastases, can be simply removed by surgery. And this is the basis for the EpiproColon diagnostic kit.

The company has plans to move toward lung cancer diagnostics, where its impact could be even more significant than on colorectal cancer.

Here’s the challenge: How do make detection effective, easily accessible AND cheap?

The standard market test up to now is a stool test. As the tumor is in the digestive tube, it releases blood in the stool for time to time.

The test is cheap, effective – but not convenient. Eligible people receive such a stool test for free, but never do it. Only 30% of patients are diagnosed this way in France and 50% in Germany. The objective is to reach 80% in the US.

The advantage with a blood-test is that it can be done at the same time as many other blood tests, requiring only 10ml to process. The patient doesn’t need to do anything beside giving blood and waiting for the results. This seems minimal trouble for such a big deal as cancer, but people are lazy.

Diagnostics ARE effective in the Fight against cancer

Taapken told me to beat cancer ‘it’s cheaper to develop diagnostics than to cure cancer‘. An early diagnostic test will lead to fewer patients in treatment (aka consuming expensive therapies), and this ultimately results in a reduced cost for the healthcare systems.

Time taken for a simple blood test is a huge advantage of diagnostics – as earlier diagnosis can be life-saving (Source: Epigenomics – EpiproColon)

This FDA approval is a significant milestone for Epigenomics

The test has already been sold in Europe (without reimbursement) and China, which accounted for 50% of the companies revenues in 2015.

But the FDA and the US market was a key challenge for the company – ‘The market is very different, you have more incentives for such a test’.

Epigenomics started the registration process early 2013 and after a long long long path, the test is finally approved! The product will be marketed thanks to a partnership with Polymedco, a company well established in the clinical testing market. 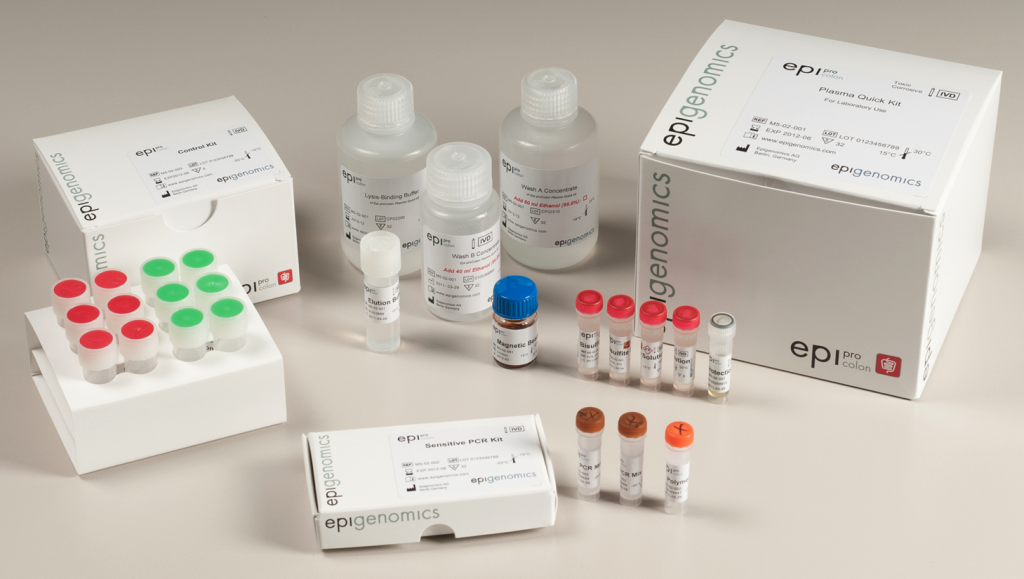 Shareholders and partners are very optomistic about the EpiproColon diagnostic kit (Credit: Epigenomics)

The CEO of the Polymedco seems enthusiastic as well:

EpiproColon has the potential to become an important opportunity for laboratories across the country to join the fight on colorectal cancer.”

The shareholders and the market seems to be enthusiast with the good news as well. The stock prices increase by 20% after the publication of the news.

This brings the market cap from €100M to €120M, still below all what the companies raised before, so to sell at this stage would be a mistake (€140M). As Taapken explained:

The company is not a commercial success for our shareholders yet but this approval could pave the way for future successes.“

This FDA approval is great news for the company, for its shareholders and for American patients affected by this terrible cancer. I have a close relative who got diagnostic and I can tell you, the early the better!